Most of us don’t think about pollen, only when we have lilies in a vase and the pollen hanging on the anthers stains anything it touches. We all know that pollination is required in plants to make fruit, but we know little about how pollen actually works.

Types of Self Pollination

This always involves two plants that have a different genetic makeup. The two plants can be the same species, different species and even different genera. Cross-pollination requires insects, wind, water and other animals to transfer the pollen across to other flowers. Apples, plums, pears, raspberries pumpkin lavender are a few examples of insect vectors. Grasses, she oaks, corn dandelions are examples of wind-pollinated plants.

Cross pollination requires the plant to expend energy on attracting insects, they usually have larger flowers with brightly coloured petals produce nectar, perfume and have elongated stamens and pistils to lure them in. Some orchids actually mimic the female wasp to entice the male wasp into their pollen-laden flowers.

Some plants like avocados have extraordinary methods of preventing self-pollination. Although avocados produce millions of flowers, the amount of fruit set is minimum compared to the flowers. The flower is complete meaning it has both the male and the female bits in the one flower. The tricky part is that it opens up as the female flower on day 1 and then closes in the afternoon, and then reopens on day 2 as the male flower. Some avocado open and close twice a day, opening in the morning functioning as a female, then closes and reopens in the afternoon as a male flower.

You would think that this is an evolutionary glitch, but it’s to keep the genetic diversity.  To make things even more impossible for self-pollination, the flowers are all synchronized in their sex when they open. So on your avocado tree the flower are nearly either all male or all female during flowering. This is the mechanism avocados use so that they require a different tree for cross –pollination. That is why you need an avocado tree from group A and one from group B so you get the timing right when the boys are in the same playground as the girls.

A few tropical trees behave in a similar fashion, so if you are not getting any joy from your avocado or custard apple, now you know why. Seems a terrible waste of energy producing all those flowers, but in a forest there’s lots of diversity to choose from, far more than an urban backyard can produce.

An area that receives little research or media overage is the number of plant species that that are reliant on animals other European bees for pollination. Bees seem to be getting all the publicity, but our own native flora is highly dependent on animals to transfer pollen from one plant to another. Australian flora and fauna have evolved together and the increasing practice of land clearing for human development and land use for mining is having a devastating effect on pollinator communities because of the disappearance of plant species.

In saying that, there are over 200,000 species of animals that act as pollinators, most of them insects like beetles, bees, ants, wasps, butterflies and moths. We also have many small mammals that are vital to the genetic diversity in WA.

The pigmy and honey possum pollinates the flowers of banksias and eucalypt species. They have grasping feet and a prehensile tail that helps them hang in the trees flowers, drinking the nectar with a very long tongue designed for that purpose. The pollen transfer is unnoticed. Land clearing and animal predation is having a significant affect on the numbers of our small marsupials, so hopefully they will still be there in 50 years.

Lizards, geckos and skinks also become involuntary pollinator distributers. They come to drink the nectar in flowers and move from flower to flower taking the pollen with them on their bodies.

The shape of a flower usually relates to the behaviour of the pollinator, plants produce flowers with landing pads, elongated pistils for hovering insects or tubes for honeyeater beaks to dive into. Bats and moths also feed on nectar rich flowers, they are usually white, highly perfumed at night and occur on isolated branches away from masses of stems and leaves so bats don’t become tangled in the growth.

Evolution is clever, pollen is beautiful under an electron microscope, lets never take it for granted, without pollen we would all starve. 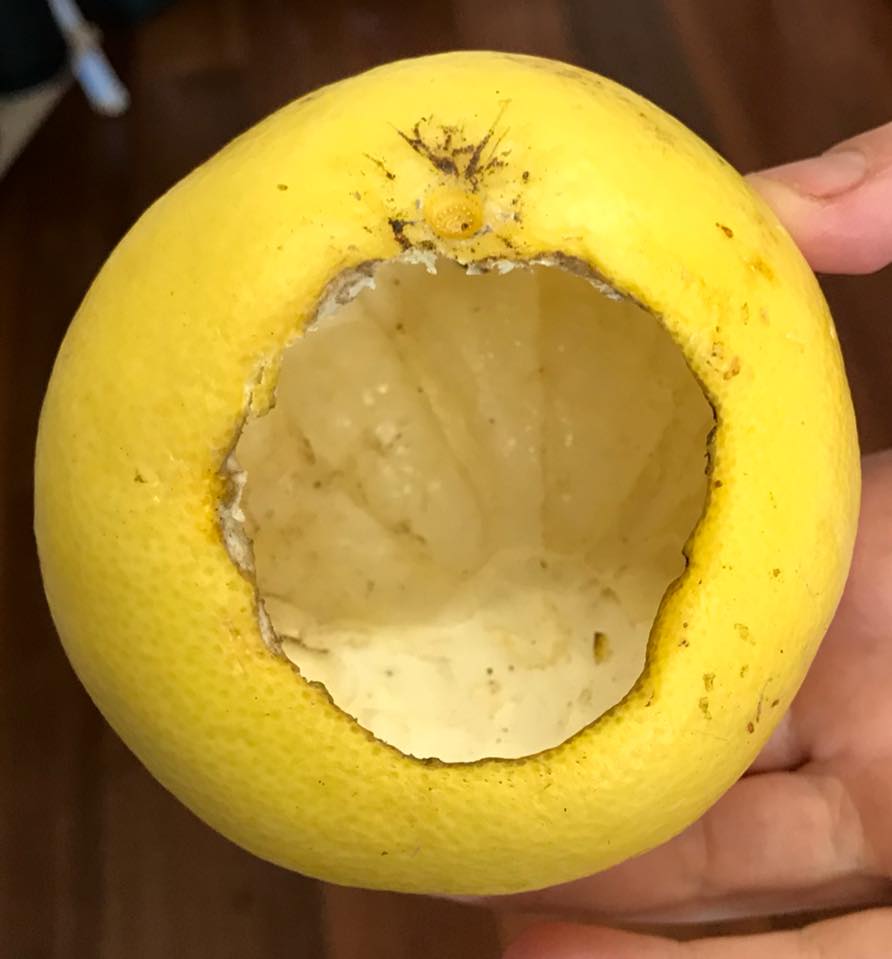 Rats VS Wildlife
General News
If you have seen this in any of your fruit, then you know without a doubt you have rats playing in your garden. They prefer a healthy diet of 3 fruit and 2 veg a day! Over the winter months rats will be looking for a nice warm spot to keep warm and safe, this…